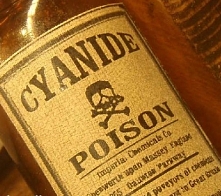 Inhalation of hydrocyanic acid vapours poses the greatest danger to the human, since they are carried by blood throughout the body thus causing a suppression of oxidative reactions in all the tissues.

Mild poisoning is possible at a concentration of 0.04 to 0.05 mg/L and exposure time of MT 1 hour. The symptoms of poisoning is a smell of bitter almonds, a metallic taste in the mouth, and scratching in the throat.

Medium poisoning occurs at a concentration of 0.12 to 0.15 mg/L and exposure of 30 to 60 minutes. A bright pink colour of the mucous membranes and facial skin, nausea, vomiting are added to the above symptoms; the general weakness increases, dizziness appears, coordination of movements is disturbed, the heartbeats are slowed down, eyes (pupils) are dilated.

Severe poisoning occurs at a concentration of 0.25 to 0.4 mg/L and exposure of 5 to 10 minutes. The poisoning is accompanied by seizures with complete loss of consciousness and cardiac arrhythmia. Then paralysis develops and breathing stops completely.

A fatal concentration of hydrocyanic acid is considered to be 1.5 to 2 mg/L with an exposure of 1 minute, or 70 mg per person when ingested with water or food. In modern industry, salts of HCN (hydrocyanic acid) are given a special place. The so-called cyanides are used in many areas: for the preparation of electrolytes for the galvanic coating of products with noble metals, in a wet photo process as a fixer, during hardening of steel, in organic synthesis, etc. Cyanides are used in the manufacture of adhesives, plastics, rocket fuel, dyes, cosmetics, nylon, edible salt, and medicines. Hydrocyanic salts are a known poison against rodents, as well as the notorious poisonous substance used during the WWI by the French Army.

But the role of cyanides in the extraction of gold and silver is especially great: cyanides are used as a leaching agent for the extraction of metals from ores. Nowadays, this method can produce gold from ore with a grade of up to 0.3 grams per ton, and about 90% of the precious metal is being extracted. This method already began to prevail in gold mining in the 1970s, and today more than 90% of the mined gold is extracted using cyanides in some countries.

In order to prevent emergencies causing death and serious damage to the health of personnel of enterprises producing or using cyanides, in accordance with the Unified Safety Rules for Crushing, Sorting, Processing of Minerals, and Agglomeration of Ores and Concentrates (PB 06-317-99/ the “Gosgortekhnadzor” of Russia), hydrocyanic acid gas detectors.

Detailed Description of the Composition, Assembly, and Programming of the SKVA-3 System manufactured in the “INKRAM” LLC Research and Production Company

The gas monitoring system provides for measurement of the chlorine concentration in air and light and sound signalling that the threshold concentration values in the air of the controlled object are exceeded, with the information displayed on the LCD touch screen. The system records (archives in the non-volatile memory of the ACM) all cases of the gas contamination (exceeding of the MPC of hydrocyanic acid in the air of the working area) in a format: date, time, detector No., threshold No., and weather data at the time the threshold values were exceeded.

The system automatically collects and processes information on the concentration of hydrocyanic acid (HCN) in air at the installation sites of gas detectors in a volume sufficient to form adequate control actions.

To control the concentration of hydrocyanic acid in the atmosphere in the absence of a stationary solution, you can use the “Amethyst” Portable Ammonia Gas Detector.

* * Projects may contain references to documents lapsed due to the constant updating of the regulatory framework. Be careful and update the information.